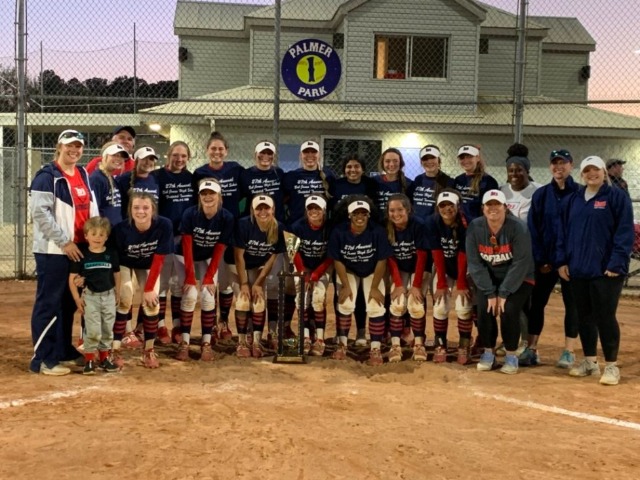 Bob Jones hosted the 28th annual Bob Jones tournament this past weekend and for the first time in history won the tournament. There were teams from Tennessee and Alabama that competed for three days in the windy cold and hot sun. There was lots of great competition but Bob Jones put on a performance playing 8 games in three days and outscoring their opponents 71 to 3.

Everyone contributed to the team victories and on Thursday night in the first game against Fort Payne there were six homeruns hit, 2 by Aubrie Lisenby, 1 by Megan Shurtz, 1 by Emmah Rolfe, 1 by Alexa Douthitt and 1 by Natalia Kenyatta.

Multiple pitchers pitched this week helping BJ clinch the championship, Emmah Rolfe walked away with a 5-0 record with 22 innings pitched, allowing 0 runs with only 12 hits and 39 strikeouts! Not only did she lead in the circle she also had a strong performance at the plate hitting .520 with 13 RBIs, 2 doubles, 5 homeruns with 11 runs scored.

As a team the bats were hot for all three days with Aubrie Lisenby hitting 4 homeruns and Charlotte Herron having a .650 average including 4 RBIs, 2 doubles, 3 triples with a total of 9 runs scored.

The team has had a strong first half of the season as they have already clinched their area and looks to have some strong wins in the second half.