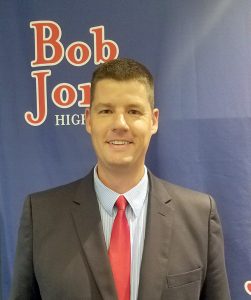 Hello, Bob Jones family.  My name is Tom Runnion, and I am the Athletic Director for Bob Jones High School.  I am from Huntsville, AL and graduated from Grissom High School in 1994.  While at Grissom, I played basketball, was in the marching band, and was very active in my church youth group.  I then attended Birmingham-Southern College where I played basketball and earned my Bachelors of Science degree in Biology.

My wife, Paige, recently retired from Madison City Schools and now works for the State Dept of Education.  We have one daughter, Parker, who attends Auburn University.  Our family enjoys traveling, going to amusement parks, scuba diving, and watching college sports.  I am looking forward to supporting our student-athletes and coaches this year as we grow together on and off the fields, courts, pools, courses, alleys, mats, and tracks of competition.  GO PATRIOTS!