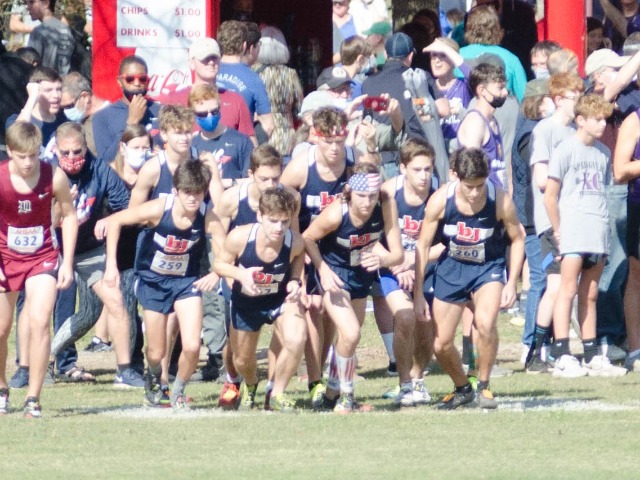 The Bob Jones Cross Country Team finished a great season full of major accomplishments at both the team and individual levels. The season ended on a hot day in Oakville, AL with the Boys Team finishing 10th in the state and the three Girls team members running hard in the state championship.

The 2020 season was filled with team wins and personal records for the entire group of BJHS and Discovery MS students representing the Patriots in Boys and Girls Varsity and JV. The Varsity Boys opened the season with back to back 1st place wins, with the JV Girls finishing 1st in their opener as well. By mid-season, every Bob Jones team had finished at least as high as 3rd and brought home a trophy! That’s no small feat considering the tough competition in events that often drew teams from over 30 schools. Over the season we had a couple of individual wins, numerous individual top 10s, countless top 20s, 140 Personal Records, and enough trophies to fill an entire trophy case!

It was truly a fantastic year for Bob Jones Cross Country! With Coach McIlwain at the helm the boys team earned a 7A state championship bid for the second time in as many years and three Girls team members qualified to compete in the 7A State race. However, perhaps Coach MacIlwain’s greatest accomplishment this season was carefully and safely navigating the team through the COVID19 pandemic and managing to complete the season from the first race through the state championship.

Many of our amazing XC athletes will transition directly to Track and Field competition in the 800, 1600, and 3200 meter races. Running year-round has produced positive results for the Patriots as evidenced by their continued improvement year over year.

We will graduate a great group of seniors this year, and we wish them all the best! Remember your achievements here at BJXC and keep running!

If you’re a 6th through 11th grader who would like to be part of one of the fastest and definitely the most fun Cross Country team in the state, come run with us during summer break and next season as we continue our quest for a state championship. If you want to get a head start on next year’s season, consider running one of the distance events in indoor and/or outdoor track. Coach Jefferson and the entire Track and Field coaching staff (including Coach McIlwain) will be there with direction and professional coaching to help you improve.