XC TO RACE AT STATE CHAMPIONSHIP! 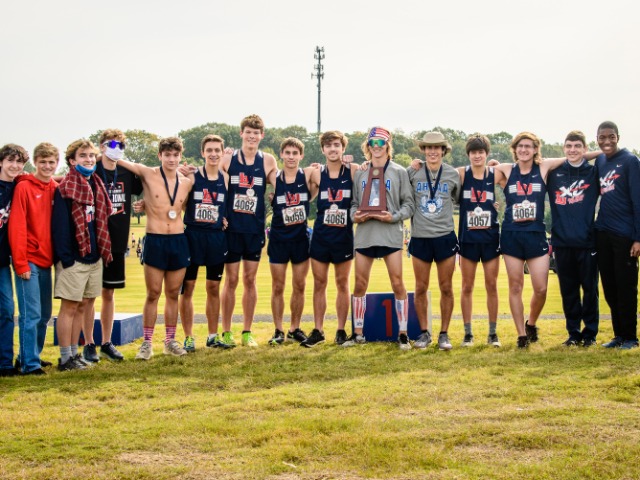 The Bob Jones Varsity Boys Cross Country Team raced their way into the State Championship race today with a state-qualifying finish at the AHSAA 7A Section 4 competition. The boys team finished 2nd of 8 teams in Section 4, just behind Huntsville (the seventh ranked XC team in the nation). James Clemens HS and Florence HS also head to state with 3rd and 4th place finishes.

James Garrison finished 8th and Ryan Bender 13th earning “All Section” honors. Mateo Santiago finished 20th and Isaac Allen 24th. Collin Spindle, Wade Bucy, and Ryan Goldsmith rounded out the points scoring in the state-qualifying effort. Owen Crow, Jackson Lozano, and Matthew Pimmel complete the sectionals/state roster as they face off against the other best 7A teams from across the state on November 14h at the Jesse Owens Course in Oakville, AL.

While the Bob Jones Girls did not qualify for state as a team, Hannah Thuss, Kricket Johnston, and Lorin Carter earned individual spots at the 7A state championship. Hannah Thuss earned “All Section” honors. The Girls team deserves praise this year as they increased their state qualifying numbers by 300% over last year. Kricket Johnston, Corinne Wilhelm, Ebba Detulleo, and Rachel Pennell did a tremendous job moving up from JV to compete at sectionals in this rebuilding year. Elaine Bao, Alexa Douthitt, Jillian Pennell, and Mackenzie Edwards also represented BJHS well today in the sectional race.

State bound athletes will continue training this week as they look for their season best performance at the State Championships next week. With one more race to go, it has been a great season for the growing and improving Bob Jones Cross Country Program. Coach McIlwain and the entire team can be proud of the 2020 season!

If you’re a 6th through 11th grader who likes to run and work hard to be a part of something great, start running now and look for more information this Spring about how you can be a part of Bob Jones Cross Country!